Tara Montgomery, an alumna of the Innovations campus of Youth Connection Charter School, is a highly acclaimed student-athlete at San Diego State University.  Tara, now a junior, was recently named a recipient of the esteemed Arthur Ashe Jr. Sports Scholar Award, selected from over 1,200 nominated minority student-athletes across the nation, representing 37 collegiate sports.  The announcement was made in the publication Diverse: Issues in Higher Education. The sport that Tara excels in is rowing, not usually associated with urban African American young women.

As a teenager, Tara’s mother encouraged her to join a Chicago rowing club where she was able to hone her skills for possible college scholarship consideration. Through hard work and diligence, both academically at Innovations (where she received a Jim Stone Scholarship) and on the boat, Tara did indeed earn a collegiate scholarship from San Diego State University where she is now a member of the first and second varsity eight crews as a starboard rower.  Following a grueling, yet rewarding, 2015-16 season, she was named an American Athletic Conference All-Academic Honoree. 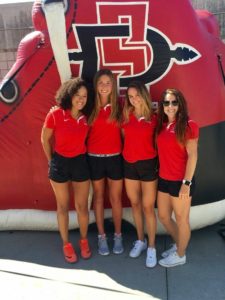 Last summer, Tara began her work as a volunteer counselor at Camp Hope, a program created by the Alliance for Hope International to serve the needs of children who have been victims of abuse. She has continued to mentor students throughout her school year and plans to return as a counselor this summer. Speaking with wisdom beyond her years, Tara believes “life is not always easy but we make the choice whether or not we let failure deter us from controlling our futures.”

Tara sees no limits in her future plans. Now pursuing an undergraduate degree majoring in psychology, she expects to continue toward her Ph.D. in social work or clinical psychology, hoping to work in the juvenile justice system and to be a positive force in the restructuring of the broken American correctional system.